John 10:1-18 “Truly, truly, I say to you, he who does not enter by the door into the fold of the sheep, but climbs up some other way, he is a thief and a robber. But he who enters by the door is a shepherd of the sheep. To him the doorkeeper opens, and the sheep hear his voice, and he calls his own sheep by name and leads them out. When he puts forth all his own, he goes ahead of them, and the sheep follow him because they know his voice. A stranger they simply will not follow, but will flee from him, because they do not know the voice of strangers.” This figure of speech Jesus spoke to them, but they did not understand what those things were which He had been saying to them. So Jesus said to them again, “Truly, truly, I say to you, I am the door of the sheep. All who came before Me are thieves and robbers, but the sheep did not hear them. I am the door; if anyone enters through Me, he will be saved, and will go in and out and find pasture. The thief comes only to steal and kill and destroy; I came that they may have life, and have it abundantly. I am the good shepherd; the good shepherd lays down His life for the sheep. He who is a hired hand, and not a shepherd, who is not the owner of the sheep, sees the wolf coming, and leaves the sheep and flees, and the wolf snatches them and scatters them. He flees because he is a hired hand and is not concerned about the sheep. I am the good shepherd, and I know My own and My own know Me, even as the Father knows Me and I know the Father; and I lay down My life for the sheep. I have other sheep, which are not of this fold; I must bring them also, and they will hear My voice; and they will become one flock with one shepherd. For this reason the Father loves Me, because I lay down My life so that I may take it again. No one has taken it away from Me, but I lay it down on My own initiative. I have authority to lay it down, and I have authority to take it up again. This commandment I received from My Father.” 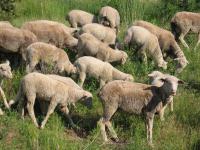 I seriously doubt that very many people of today understand and appreciate all of Jesus’ teachings in this statement. I am sure that I do not. Sheep, shepherds, security of the flock, the relationship between a quality shepherd and ancient flocks, and sheep cotes are just not a part of our background. There are some lessons in this statement that would have been quite obvious to Jesus’ audience that are not obvious to us. It simply means we have to be open and try harder to understand.

The relationship of a quality shepherd with his flock of sheep was centuries old. The image of a shepherd fit Jesus’ work and mission in many ways. I find it fascinating that Jesus did not compare his earthly mission to the work of the wealthy, but to the work of a shepherd.

The issue for all of us remains the same for a thousand years: “Who is Jesus? Is he really alive from the dead? Did God really resurrect him from the tomb?”

If Jesus is who He said He is, live for Him. Only He is your security!

Welcome to Gods Message on the web. My name is Greg and I want to welcome you. I started doing these Podcasts, MP3, and Audio Books back in 2007. Stay awhile and make yourself at home. The Christian Podcasts here are free and for everyone to enjoy. I’m doing a complete series on David Chadwell who is a retired minister from Fort Smith, Arkansas. I’ve also done an Audio Book for Wayne Jacobsen’s the Naked Church. Plus a series of MP3s for Pastor Billy Crone and his The Final Countdown series. View all posts by Greg

This site uses Akismet to reduce spam. Learn how your comment data is processed.

annihilation audio audio book Behold I stand at the door and knock book Christ is real Change Your Focus Christ is Savior and Lord Church of Christ david chadwell Dusty Owens ekklesia freedom Free to be Just a Christian God Going back to where we started Has God Abandoned me hell Hell Eternal Torment or Complete Annihilation imitation Is It Worth It? Jack Wald Leaving the Church of Christ mp3 My Opinion Of Me Pathway to the Kingdom podcast power Rabat International Church Solving the Problem of Faith The Fruit Of The Spirit The Naked Church The Parable of The Talents The War and Me Thoughts on Punishment of the wicked Unity The Meaning of Oneness wayne jacobsen What are you trying to prove What is the why Who Turned Loose Me Or God Why I left The Church of Christ